(HUNT VALLEY, MD)  – Today, French’s® announced the availability of French’s Mustard Beer, just in time for National Mustard Day. Developed in partnership with Oskar Blues Brewery, known as the maker of the original craft beer in a can, this limited-release tropical wheat beer is brewed with French’s Classic Yellow® Mustard. French’s Mustard Beer will be available to order through national craft beer marketplace and platform, CraftShack, starting August 1st as well as select Oskar Blues Brewery taprooms in Boulder and Longmont, Colorado and Brevard, North Carolina while supplies last. 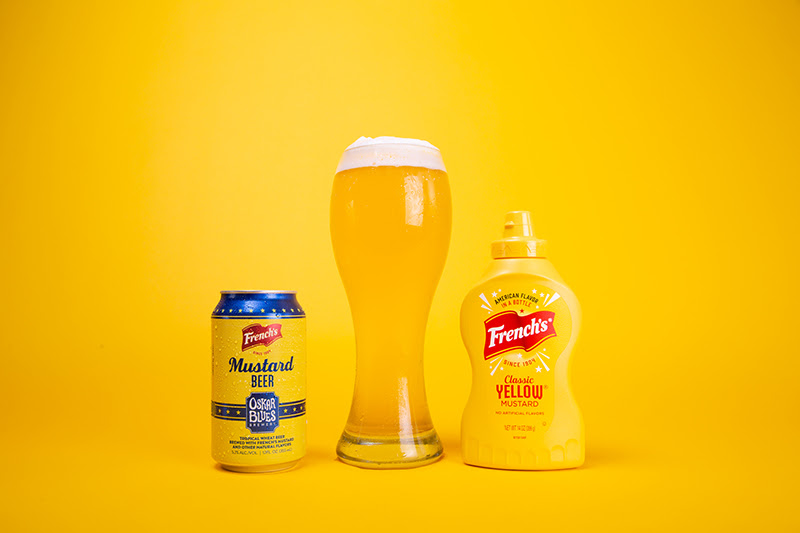 French’s Mustard Beer is infused with key lime, lemon, tangerine, and passion fruit to create a tart, refreshing match for the bright and bold zip of Classic Yellow Mustard – perfect for summertime backyard barbecues. This unique Mustard Beer offering in celebration of National Mustard Day is a follow-up to last year’s wildly popular French’s Mustard Ice Cream.
“We’re stoked on bold flavors at Oskar Blues Brewery and we never shy away from a challenge,” said Oskar Blues Head Brewer, Juice Drapeau. “With French’s Mustard Beer we elevated the Classic Yellow Mustard flavor with tangy lemon and lime to create a tropical wheat ale I’d pair with a loaded hot dog on the hottest day of the year.”
“French’s enjoys creating new curiosity around a flavor that has been a staple in homes for over 115 years,” said Jill Pratt, Chief Marketing Excellence Officer for French’s. “The incredible reaction to last year’s release of our Mustard Ice Cream showed us how far people are willing to go to savor this favorite condiment.  We promise this French’s Mustard Beer will not disappoint either.”

To learn more about this special batch, visit MustardBeer.com. Must be 21 years or older to enter site, order beer or taste in Oskar Blues brewery taprooms. Be sure to tag @Frenchs & @OskarBlues with the hashtag #MustardBeer to show us how you are enjoying the French’s Mustard Beer.

French’s was first introduced to the hot dog – and the public – at the World’s Fair in 1904.  It was love at first bite.  Through the years, French’s has become a staple from the ballpark to the backyard to the holiday table.  French’s family of products includes Classic Yellow Mustard, Tomato Ketchup, Worcestershire Sauce, Crispy Fried Onions and more.  Visit www.Frenchs.com for more information and recipes.

French’s is one of McCormick & Company’s (MKC) brands. As a global leader in flavor, McCormick has built a portfolio of leading flavor brands that enhance people’s enjoyment of food all around the world. Every day, no matter where or what you eat, you can enjoy food flavored by McCormick. McCormick Brings the Joy of Flavor to Life™.