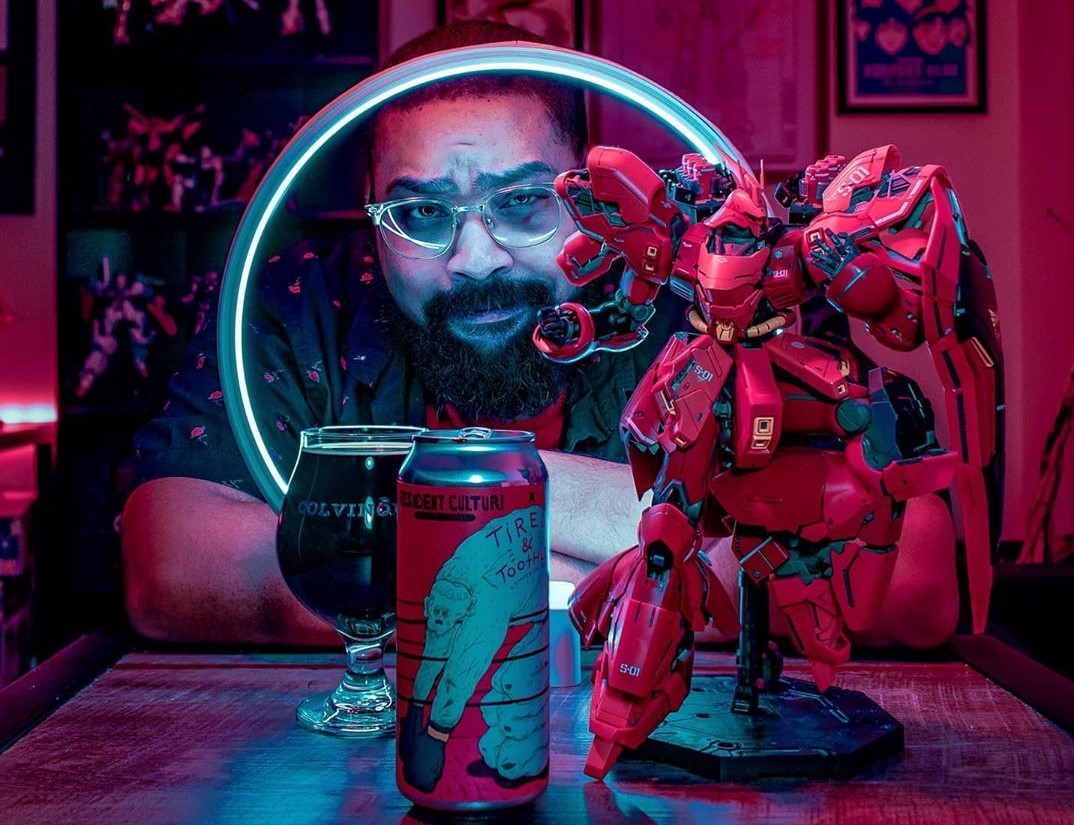 With over 22,000 followers, Jamel Colvin is among the most popular beer personalities on Instagram. A college instructor with a master’s in literature by day, Jamel seems surprised with his online success, especially given the rather niche nature of his content. Here, he sits down with The Full Pint to talk about Michigan beer, Gundam, and how the two come together.

Sam Otterbourg: I’m looking forward to talking to you for a while. I’ve really enjoyed your account.

SO: I mean, it is niche, but you’ve got a pretty large following.

JC: It sounds weird, but I don’t think about it. I have noticed an uptick over the last year, but I don’t really consider myself a big account.

SO: It’s definitely a niche thing, but I think that’s part of the appeal. Beer and detailed mecha models is not really a combination I would have though of. How did that come about?

JC: When I first started trying beers I posted them on Instagram as pictures- not seriously, it wasn’t a dedicated account using hashtags or anything, and when I started building Gundam again I just put them with them, and over time I had people going “Wow, this is a cool concept”. So I decided to, well, take it seriously. I never expected people to have such a positive reaction since I didn’t know a lot of people who liked Gundam, and I only knew a few people who liked beer, but I mean on the internet anything can be popular.

SO: So, you and I are dorks, but for people who don’t know, Gundam is a long running Japanese franchise about Mecha. How would you define that?

JC: Well, I mean, I would say the shorthand is giant robots, even though it encompasses more than that. It’s short for mechanicals, and they’re generally large human-shaped. The better examples of the genre deal more with the implications of that kind of technology beyond “look, cool robot!” Gundam is interesting, since a lot of the stories they tell are anti-war but they’re also a toy company and want you to buy figures and models, so they have to at least make war look a little cool.

SO: How did you get into building models?

JC: I first heard about it when they brought Gundam Wing over in 2000, and you could get some of the High Grade models at art shows or comic shops. I stopped in high school because, you know, high school, but I started building and collecting again a few years ago.

SO: So, High Grade is one of the various model types, but you build mostly in Master Grade. How long does that take you?

JC: It depends! Master grade means that the model is at 1/100th scale, so if it’s based off the actual size in the show, Some models might take a few hours, and some might take a few days, not including painting or decaling or anything.

SO: Oh, wow, and you’ve built a lot of these! How do you decide to what model to pair with a beer?

JC: I do have a system, but it’s not as cool as people might think. I go by color. I like to color coordinate- it’s not always possible but sometimes I’ll have a perfect match. I try to vary styles so I get a variety of can sizes. You can’t put a huge model next to a 12 ounce can, or a really small one next to a 750. Color and size are the biggest factors for the aesthetic.

SO: You feature a huge variety of different beers on your page as well. How did you first get into craft beer?

JC: I was at a friends place, and he says “Hey, I found out I’m allergic to hops, drink this”, and it was a bottle of Bam Noir from Jolly Pumpkin. It’s a dark farmhouse ale, and I had never had anything like it and I drank the whole thing, not knowing anything about beer. So, I just started looking for anything that was either said “dark” or “farmhouse” on them, and from there I got into Belgian dark ales and sours. Belgian Quads are still my favorite style.

SO: Oh, absolutely. Quadrupels are some of my favorites too. Do you have a favorite?

JC: St. Bernardus Abt. 12, the quadrupel. I go back to it every few years like, “oh hey, I’ve had a lot more beer now, maybe it’s not as good as I remember”. No, man. It’s consistently fantastic. Whenever I drink it, it feels like I’m new at this again.

SO: As you’ve been reviewing beer the last few years, do you think your taste has changed at all or have you leaned in harder on what you’ve liked in the past?

JC: A little of both. My taste changed at first. You drink the cool beers that you’re supposed to like. I remember I didn’t like IPAs, and then I went through a phase where I only liked the really hoppy ones. Right now, if anything is good I’ll drink it. At the beginning I remember not drinking lagers because those aren’t the “cool beers”, and then a couple years ago I was at a brewery and I had their pilsner and I was like “yeah, this is amazing,  I remember now. I like all kinds of beer”. If it’s good, it’s good.

SO: A lot of your reviews have that same attitude. I appreciate the amount of variety in them for sure, and they’re usually really positive.

JC: I actually used to review every beer I bought, and sometimes the beers aren’t very good. And I noticed that when I posted a beer that I didn’t think was good or was a bad batch, people didn’t tend to like those posts. I looked at and said “if I don’t like reviewing beers I don’t like, and if they don’t like when me reviewing beers I don’t like, what if I only reviewed beers that I liked?” And, so,  I would get to a point where I’d stage a picture, and start reviewing and I’d realize “this is kind of a turd” and have to start over.

SO:  That’s interesting. I’ve seen a lot of personalities saying the opposite, where they get more engagement from negative content.

JC:  I think it’s mostly that people tend to see my posts and go “oh wow, I would like to do that”, and so if I post a kit that looks really cool, they want that. If I post a beer and I say “this is a stout with dark chocolate and bourbon”, people want to drink that. If I post a cool picture of a beer and say that it isn’t actually that great, I think people are kind of disappointed.

SO: On that note, who are the breweries in Michigan I should be excited about?

JC: My favorite Michigan Brewery is Homes, in Ann Arbor. They do a ton of juicy IPAS. They do a ton of sours. The guys there are really cool. Honestly, I’d put their IPAs up against the best IPAs in the country. Its just such a masterful brew. They really only do hazy IPAS and sours, but they do them really well.

SO: Yeah, we actually get them in North Carolina. I really like their Boss Tweed.

JC: Yes! I usually have Boss Tweed or M-43 in the fridge. They also brought out a Brut IPA, which isn’t really a style I was excited about but they did it really well. They’re usually my recreation beer.

SO: How about from outside Michigan? Who if you see something from you have to put on the feed?

JC: I really like Toppling Goliath. I tried Psuedo-Sue a few years ago in Chicago and was like “Oh man, I have to get more of this immediately”. Whenever they bring anything out I have to get my hands on it. They distribute through Tavour now, so I don’t have to drive to Chicago anymore. I also really like Grimm. They were always at one of my local stores and I would always grab anything new.

SO: Tavour is one of your sponsors, right?

JC: Yeah, they send me beer, which has been really great during Covid.

SO: Last Question- Any big plans for yourself or the account post-pandemic?

JC: My fiancé and I are in the process of buying the house, which means I’ll have more space for modeling. The main thing that’s been holding me back is my apartment doesn’t have good lighting. I want to do more videos and Instagram live. Somebody suggested doing a drinking/building stream on Twitch- crack open a beer, talk about it, build with it, answer questions. I’m really interested in doing stuff like that. I used to teach college, but I’m with everything going on I’m not sure how that’s going to work now, but honestly if this keeps going well I might switch to this full time. It at least seems less deadly right now.

You can follow Jamel on Instagram @Colvinology, where he posts beer reviews and models Monday, Wednesday, and Friday.