(BALTIMORE, MD) – Heavy Seas Beer is excited to announce the next release from its 15 Barrel Brewhouse, Bmore Snoball Egg Custard & Bmore Snoball Skylite. This is our tribute to hot summer days in Bmore. Nothing cools you off like a refreshing Egg Custard or Skylite snoball and these beers are our playful take on the Baltimore street corner staple. The duo will be available in 4-packs of 16oz cans during a curbside can release from July 24th- July 26th. 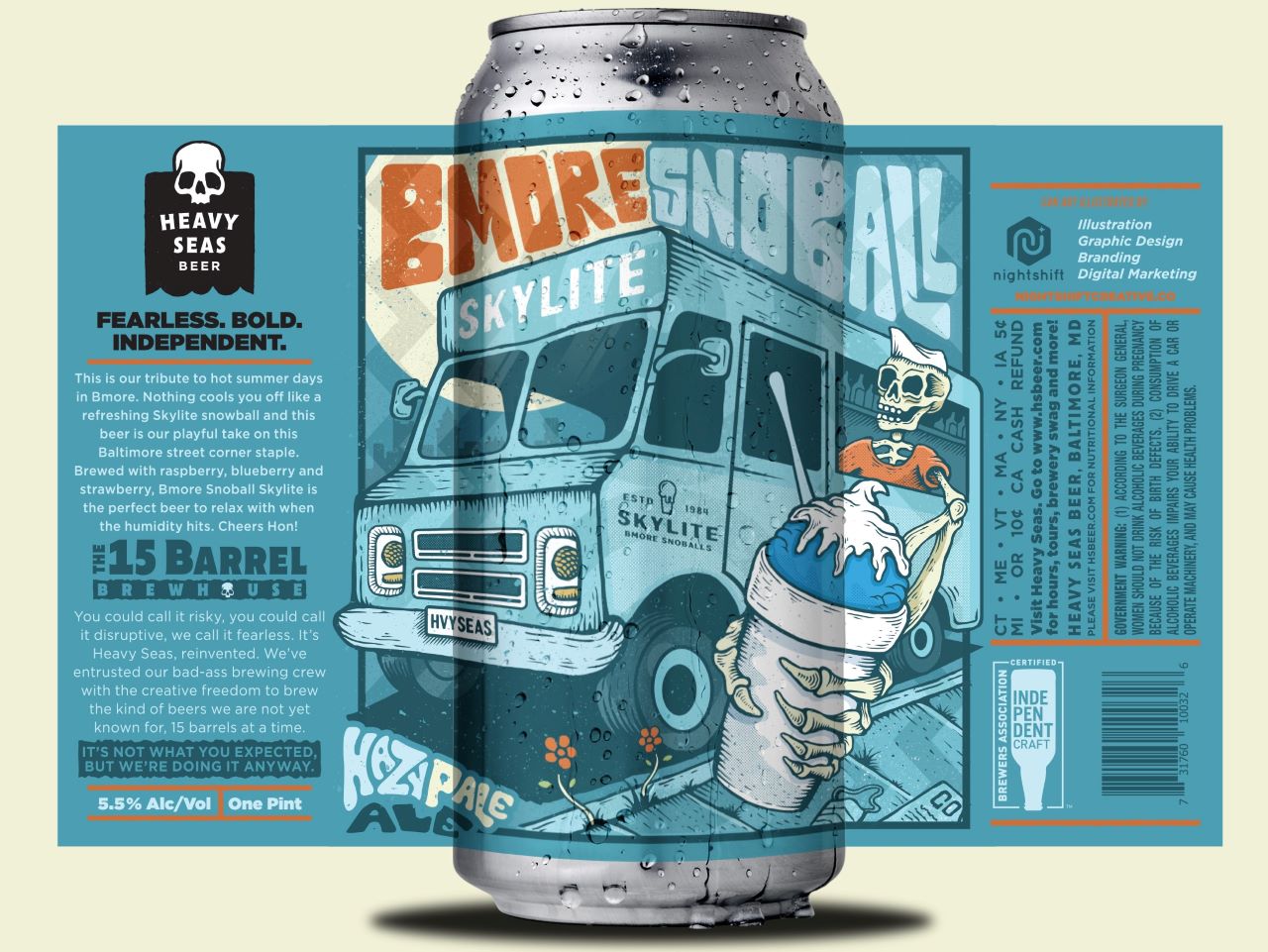 “No summer in Baltimore is complete without a snoball,” says Heavy Seas Associate Brand Manager, Amanda Zivkovic. “After the success of last year’s Egg Custard ale with vanilla and spices, we wanted to experiment and create its flavor companion: Bmore Snoball Skylite. It’s hard enough to pick between the two flavors at the snoball stand–so brewing both meant we didn’t have to choose!”

“We created a dry-hopped hazy “pale” ale inspired by Skylite,” says Heavy Seas Brewmaster, Chris Leonard. “We used the flavors of raspberry, blueberry and a hint of melon. We used El Dorado and Mosaic hops, which are notoriously fruity in aroma. To complete the illusion, we used blueberry and raspberry juice, along with some “secret ingredients,” to create an aromatic, hazy azure brew with a dry finish that is sure to delight. Cheers.”

The Bmore Snoball label artwork was designed by local Baltimore artist, Chris Gipple, of Nightshift Creative, who also designed Heavy Seas’ 24 Anniversary beer label this past December. All the taproom exclusive beer labels will be designed by Chris in 2020.

Heavy Seas Beer was founded by Hugh Sisson in 1995 and has grown the business to become one of the most respected and award-winning craft breweries on the east coast. As the first pub brewer in Maryland, Hugh was responsible for the legislation that made brewpubs legal in the state. Now over two decades later, Heavy Seas is celebrating its 24th year of brewing independent craft beer in Baltimore. The brewery also continues to expand its beer portfolio, now producing 23 different beer styles and distributing to 20 states as well as Washington D.C. Heavy Seas was also named Beer Connoisseur Magazine’s 2017 Brewery of the Year. For more information, please visit www.hsbeer.com.